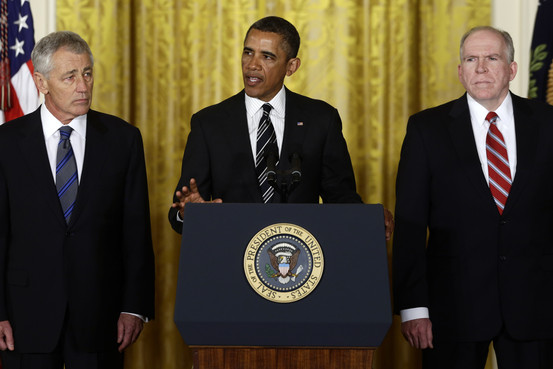 Several groups and political leaders said Monday they would not formally oppose the choice, though some admitted to being lukewarm. Among them, the American Israel Public Affairs Committee (AIPAC), the Anti-Defamation League, and former Rep. Barney Frank (D-Mass.), who earlier said he opposed the choice.

“I was hoping the president wouldn’t nominate him,” former Rep. Barney Frank told the Boston Globe  Monday. However, Frank added, while he resented what Hagel said in 1998 regarding the candidacy of an openly gay ambassador nominee, for which he has since apologized, “the question now is going to be Afghanistan and scaling back the military. In terms of the policy stuff, if he would be rejected [by the Senate], it would be a setback for those things.”

“Senator Hagel would not have been my first choice, but I respect the president’s prerogative,” Abraham H. Foxman, ADL’s national director, said in a statement Monday.

“AIPAC does not take positions on presidential nominations,” the group's spokesman Marshall Wittman said by email Monday. Perhaps easing the group's concerns about the appointment, the Atlantic’s Jeff Goldberg reported, the fact that White House Chief of Staff Jack Lew reached out to AIPAC's executive director Howard Kohr last week to argue the case for Hagel.

“This Hagel is ‘anti-gay’ smear campaign is disgraceful and a damn lie,” Chris R. Barron, the former national director for Log Cabin Republicans, wrote on Twitter. “Fact: Chuck Hagel has a better record on gay rights than Mitt Romney.”

Indeed, opposition to the Hagel nomination appeared to be waning so quickly in the face of his actual nomination that one pro-Hagel 501c4 group formed to campaign for his confirmation, headed by former Reagan administration envoy Steven Burt, has stood down before taking any action, CNN reported Monday.

The most vocal anti-Hagel activists on Monday appeared to be the Bill Kristol-led GOP outfit, the Emergency Committee for Israel (which previously ran ads opposing Obama's election), the Republican Jewish Coalition (which also opposed Obama's election), the head of the Israel Project, a non-profit group; WashingtonPost.com columnist Jennifer Rubin, and the current leadership of the Log Cabin Republicans, which took out newspaper ads against Hagel in recent days. (The Emergency Committee for Israel bought the ChuckHagel.com Internet domain on January 2nd, Buzzfeed reported.)

House Majority Leader Rep. Eric  Cantor (R-Virginia), the only Republican Jewish member of Congress, also expressed opposition to the nomination Monday, though his chamber of Congress doesn’t vote on the matter.

In the body that does, the Senate, both Texas Republican Senators John Cornyn and Ted Cruz, as well as South Carolina's Lindsay Graham suggested in recent days they were likely to vote against Hagel.

However, fellow former Vietnam veteran Sen. John McCain (R-Arizona), a leading Senate hawk who has a long and complicated friendship with the Nebraska Republican, released a nuanced statement, congratulating Hagel for his nomination and praising him for his honorable service in Vietnam. But, McCain said, he has “serious concerns” about some of Hagel's positions on national security matters he would be asking about in his confirmation hearing.

If confirmed, Hagel would be the first former enlisted soldier and Vietnam combat veteran to lead the Pentagon.

President Obama said that experience has made Hagel a champion for the troops sent to fight and die—in implicit contrast to Washington's cadre of armchair warriors. “My frame of reference is geared to the guy at the bottom who is doing the fighting and the dying,” Obama cited Hagel.

One thought on “Opposition to Hagel may be softening”