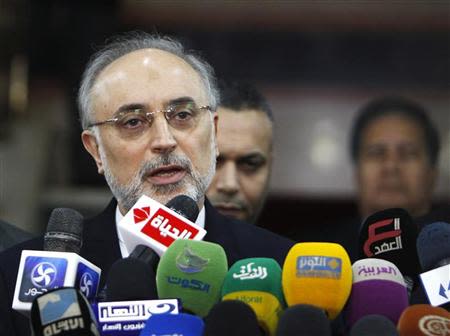 After weeks of Iranian foot-dragging, western negotiators are pressing Iran to commit to a firm date for resumed nuclear talks.

“We have been very surprised to see Iran come back to us again and again with new pre-conditions on the modalities of the talks, for example by changing the venue and delaying their responses,” a spokesperson for European Union foreign policy chief Catherine Ashton responded to a question from the Back Channel Wednesday.

Iranian Foreign Minister Ali Akbar Salehi was cited in media reports Wednesday proposing Cairo host the next round of talks with the P5+1.

But western diplomats say such reports are “total spin,” and that in fact, Iran has not yet agreed to a new meeting, in Cairo or anywhere else.

“Several venues have been proposed. We do not exclude any, but Iran is proposing different venues all the time,” a European official said. “Iran appears to be trying to delay the process by coming up with new conditions.”

“We think that our Iranian colleagues could be doing this a little faster,” Russian Foreign Minister Sergei Lavrov told reporters in Moscow Wednesday, the AFP reported.

Previously, a Russian official said he expected a new round of P5+1 talks with Iran to be held by the end of February, in Istanbul, the AFP report said.

Iranian sources have suggested that Iran has wanted to see the updated P5+1 package ahead of the meeting, out of concern it would be just a warmed-up version of the old one and they would be blamed for the meeting  failure.

But Iran appears to be conflicted about how to proceed.

“I think we sometimes read too much into Iranian foot dragging,” Karim Sadjadpour, an Iran expert at the Carnegie Endowment for International Peace, told the Back Channel last week. “Anyone who’s spent time in Tehran traffic or dealt with Iranian government agencies knows that efficiency and promptness are in short supply, especially on such a sensitive issue in which there may not exist an internal consensus.”

The Iranians “need to get in the room and talk seriously,” Mark Fitzpatrick, of the International Institute for Strategic Studies, said Tuesday, rather than try to “pre-negotiate” the package in advance.

“The E3+3 are still hoping to reach agreement with Iran on the modalities of the talks, including venue, with a view to resuming talks shortly,” Ashton’s spokesperson said, adding consultations with Iran are ongoing. “We have always been very flexible and have been in regular contact with them as part of an ongoing process.”