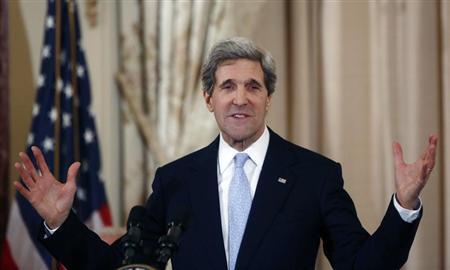 New U.S. Secretary of State John Kerry issued a heartfelt plea on Friday for Iran to take up the offer for serious negotiations, in order to peacefully resolve international concerns over its nuclear program..

“The international community is ready to respond if Iran comes prepared to talk real substance and to address the concerns, which could not be more clear, about their nuclear program,” Kerry said at a press conference with Canadian Foreign Minister John Baird Friday, Reuters reported.

“And so my plea to the Iranians…is a clear statement,” Kerry said. “We are prepared to let diplomacy be the victor in this confrontation over their nuclear program.”

His remarks come as diplomats from the United States and five world powers are preparing to resume nuclear talks with Iran in Kazakhstan at the end of the month, after an eight-month break. Earlier this month, Iran notified the International Atomic Energy Agency that it plans to install 3,000 advanced IR-2M centrifuges at its Natanz enrichment facility, a development Kerry called “disturbing.” President Obama is also expected to be focused on Iran when he meets with Israeli leaders next month.

“The president has made it clear that his preference is to have a diplomatic solution, but if he cannot get there, he is prepared to do whatever is necessary to make certain that Iran does not have a nuclear weapon,” Kerry said.

One thought on “Kerry urges Iran to let diplomacy succeed”