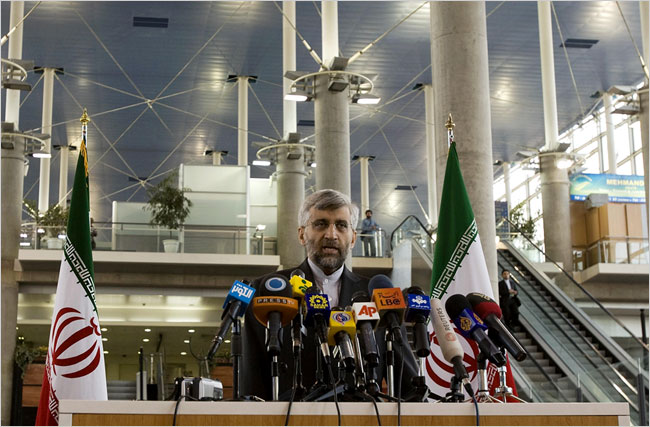 Even as Iran presidential candidate and presumed frontrunner Saeed Jalili has flaunted his anti-US hardliner credentials on the campaign trail, it’s worth noting a less remarked-upon aspect of his professional resume. In October 2009, Jalili became one of the only Iranian officials to meet one-on-one with a US diplomat in three decades.

The meeting, with then Under Secretary of State William Burns, now the US Deputy Secretary of State, took place October 1, 2009, at a villa outside Geneva, on the sidelines of Iran nuclear negotiations with six world powers.

Lead US negotiator Burns and Iran’s Jalili held a “one-on-one sidebar conversation,” a White House spokesman confirmed at the time. “The sidebar occurred at the Villa”–Villa Le Saugy, in the Swiss countryside village of Genthod–during a lunch break in the nuclear talks with the so-called P5+1.

Iran and six world powers announced tentative agreement at the Geneva meeting on a nuclear fuel swap deal that would provide fuel for the Tehran Research Reactor in exchange for shipping out most of Iran’s stockpile of 3.5% enriched uranium; but the deal later broke down at follow up technical talks in Vienna.

Iran also agreed at the Geneva talks to let IAEA inspectors visit the secret Fordo enrichment facility at Qom, whose discovery the leaders of the United States, UK and France had jointly announced just days before, at a G-20 summit in Pittsburgh.

“Iran is on notice that when we meet with them on Oct. 1 they are going to have to come clean and they will have to make a choice,” President Barack Obama, flanked by French President Nicolas Sarkozy and UK Prime Minister Gordon Brown, said September 25, 2009.

In retrospect, it seems plausible that the Iranians agreed to the sit-down with the Americans in Geneva as a tactical gesture, out of concern over the western reaction to the discovery of the Qom enrichment facility, which Iran only hastily declared to the IAEA after it realized it had been discovered. But one Iranian source, speaking not for attribution, said the political decision in Tehran to hold the bilateral meeting with the Americans had already been taken.

Following the Geneva meeting, US envoys subsequently briefed foreign allies “that the U.S. sidebar meeting with Iranian representatives was direct and candid,” according to an October 5, 2009 US diplomatic cable from the US embassy in Manilla that was released by Wikileaks. While “the discussions were a constructive beginning,” the US envoys also relayed, “they must now be followed by positive action.”

“Iranian press gave considerable coverage to the bilateral meeting between [Under Secretary] Burns and Jalili,” another October 4, 2009 US diplomatic cable, sent from the U.S.'s Iran regional presence office in Dubai, noted. “While little coverage went beyond the Department's announcement that the meeting had taken place, Tabnak noted that unlike Iran's previous discussions on the nuclear issue, this time it was face-to-face with the US.” Another Iranian paper described the meeting as “unprecedented,” the US diplomatic cable continued.

Jalili’s deputy, Ali Bagheri–who has lately been accompanying Jalili on the campaign trail–acknowledged the Jalili-Burns sidebar meeting in an interview with Iran’s state television at the time, but stressed the meeting occurred only at the Americans’ insistence.

“The meeting of the US delegation with the Iranian delegation was held at the request of the Americans,” Bagheri, now deputy of the Iran Supreme National Security Council, told Iran’s state-run TV, Fars News reported at the time, adding: “Elaborating on the contents of sideline talks between the Iranian and American delegations, Baqeri said that the meeting was held merely within the framework of Iran's proposed package.”

Iran, in the subsequent three and a half years of on-again, off-again nuclear talks with six world powers, has never since agreed to a bilateral meeting with the United States. Nor has it agreed to another P5+1 confidence building proposal.

“The Islamic revolution has shaped my thinking, and now we know that a nation can defend its rights, and can make progress, despite what certain powers like America would like to see,” Jalili told the Christian Science Monitor’s Scott Peterson in an interview in Istanbul last week.

Jalili was in Istanbul for a dinner meeting with European Union foreign policy chief Catherine Ashton, that was organized to keep the nuclear diplomacy channel alive until talks might resume some time after Iranian elections, scheduled for June 14th.

(Top photo: Iran’s top nuclear negotiator, Saeed Jalili, ahead of the October 1 2009 meeting, said in Tehran he was heading for talks in Geneva with a “positive approach.” Caren Firouz/Reuters. Second photo: Dr. Saeed Jalili (center) with his brother Vahid Jalili (left), and his SNSC Deputy Ali Bagheri (right), on the campaign trail May 18, 2013, from Jalili's Instagram account.)