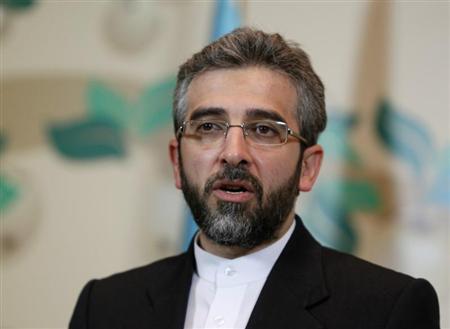 The meeting is the “follow up to the last round of negotiations” between six world powers and Iran held in Almaty, Kazakhstan April 5-6, Ashton’s spokesperson Michael Mann said in a two-line statement Thursday.

Ashton is expected to be “in listening mode” in the follow-up consultation, a western diplomatic source told Al-Monitor Thursday is his understanding.

“The P5+1 are expecting some sort of an indication that Iran wants to engage seriously,” the diplomat, speaking not for attribution, said, adding that “the bar seems to be rather low.”

“We are waiting to see whether Lady Ashton’s response is going to cover the time and venue of another round of negotiations, or will she limit her response to just discussing the substantive side of things,” Bagheri told Reuters  in an interview in Geneva April 25th.

Bagheri, in the Reuters interview, also said that Iran is willing to discuss requests from the International Atomic Energy Agency (IAEA) “which go beyond our obligations” under the nuclear Non-Proliferation Treaty, the Reuters report said.

Iran is also due to have a meeting with the IAEA on May 15th.

“Once we reach an agreement with the agency, we also expect the (six powers), because of such cooperation with the agency which goes well beyond our obligations, to lift a number of sanctions. Unilateral sanctions which are illegal,” Bagheri told Reuters. END_OF_DOCUMENT_TOKEN_TO_BE_REPLACED