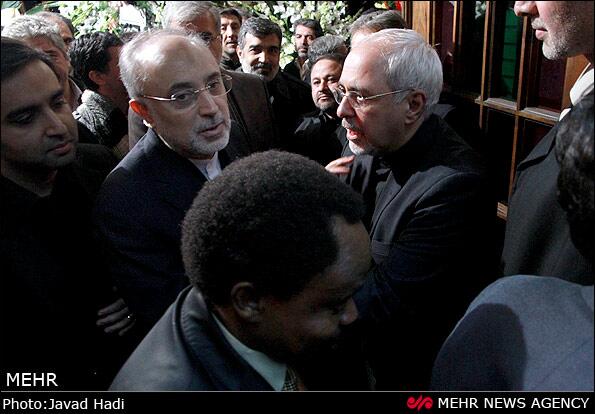 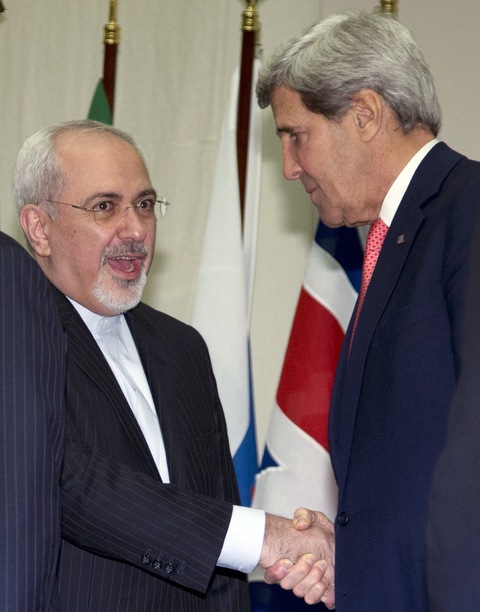 Differing interpretations over whether Iran can conduct research on more advanced centrifuges under a nuclear deal signed last month is among the key issues to be resolved for the agreement to enter into force, nonproliferation experts suggested Sunday.

Technical experts from Iran and six world powers are scheduled to resume talks on implementing the Joint Plan of Action in Geneva on Monday, December 30th.

“What may be happening here is that Iran has notified the P5+1 that it plans to install additional IR-2M centrifuges at the Pilot Fuel Enrichment Facility at Natanz where it has historically conducted centrifuge research and development,” Jofi Joseph, a former US official who worked on Iran nuclear issues, told Al-Monitor.

“Throughout the diplomatic talks that culminated in the Geneva agreement, Iran has insisted upon the right to continue unfettered research and development for its centrifuge program that should fall outside any limits on its centrifuges producing enriched uranium,” said Joseph, who recently wrote about potential pitfalls to the Nov. 24 interim Iran nuclear deal at the Atlantic Council website. “The P5+1 always pushed back, seeking to protect against a scenario where Iran could use this R&D loophole as a back door to expand its centrifuge capacity even as a [confidence building measure] CBM agreement took effect.”

The Joint Plan of Action, signed by Iran and the P5+1 November 24th, states that: “Iran will continue its safeguarded R&D practices, including its current enrichment R&D practices, which are not designed for accumulation of the enriched uranium.”

“The P5+1 likely interprets this language to mean that Iran will not expand the level, scope,or sophistication of its centrifuge R&D beyond existing practice,” Joseph suggested. “While Iran probably takes a more expansive view, arguing instead that, so long as it not expanding the numbers or types of centrifuges in the production-related areas of Natanz or Fordow, it remains in compliance with the Geneva agreement.”

Iranian negotiators did not respond to a query from Al-Monitor Saturday if that was the main issue holding up the JPA entering into force. But Iranian officials seemed to allude to the matter in comments to Iranian news media this week. “A new generation of centrifuges is being built, but they should undergo all tests before mass production,” Ali Akbar Salehi, the head of the Atomic Energy Organization of Iran (AEOI) and MIT-educated former Iranian foreign minister, was cited by Iranian news media as saying Sunday.

“The negotiations are proceeding slowly as there are misunderstandings over interpretation of some elements of the accord,” Iran’s deputy foreign minister and deputy nuclear negotiator Abbas Araghchi told Mehr News Agency, the AFP reported Sunday, adding that “ff expert-level talks are fruitful, a date [for implementing the deal] will be decided, which I guess will be at the end of January.”

The parties should be able to resolve such ambiguities and differences to make way for the JPA entering into force, nonproliferation expert Mark Hibbs of the Carnegie Endowment for International Peace told Al-Monitor in an interview Sunday.  “This is not a technical problem,” Hibbs said. “There’s a huge amount of documentation – reams and reams and reams of technical discussion between Iran and the US, [on] how to do this….[there are] lots of ways of skinning the cat.”

Negotiators in Geneva last fall, led by EU foreign policy chief Catherine Ashton, US Secretary of State John Kerry and Iran Foreign Minister Mohammad Javad Zarif, made the deal in a hurry. “Now what they need to do is nail down all the technical details,” Hibbs said. “What needs to happen [to] close on some of this stuff is just very complicated…for example, verification procedures…questions about what specific piping they have to inspect, who gets access, all these things.”

But he did not think the parties would let the agreement break down. The Obama administration sees the agreement as “confidence-building; there’s a premium on deal-making,” Hiibbs said. “And the Iranians, like anyone else, want to get the best deal they can.”

Amid a continued stalemate in efforts to resume nuclear talks, a key advisor to Iran’s nuclear negotiating team has published a proposal he says has been previously presented to the United States and five world powers for resolving international concerns about Iran’s nuclear program.

The other is Hamid-Reza Asgari, the low-profile legal advisor to Iran’s Atomic Energy organization and senior non-proliferation advisor to Iran’s National Security Council. Asgari led Iran’s team to technical talks with arms control officials from the United States and other P5+1 powers in Istanbul July 3rd.. Asgari previously met with American, as well as Russian and French diplomats, in Vienna on October 21, 2009 to discuss the details of a nuclear fuel swap deal that later fell apart amid domestic infighting in Iran.

Asgari “is the real boss,” the Iranian source told the Back Channel.

“The two sides, according to Tehran, should first address each other’s concerns,”  Mohammadi wrote in Iran Review January 9th:

The United States should, thus, recognize Iran’s right to enrich uranium and Iran, in return, will announce that it has no plan to build nuclear weapons. In the next stage, the US and the European Union should remove all unilateral sanctions against Iran and Iran, for its part, will take immediate steps to address the remaining concerns of the International Atomic Energy Agency (IAEA) which the Western countries claim to be very important. In fact, a new round of IAEA’s inspections of and access to Iran’s nuclear sites will begin. In the third stage, Iran will be ready to negotiate about 20-percent enrichment provided that the United Nations Security Council will annul all its sanctions resolutions against Tehran. […]

The proposal, which would not have Iran negotiate curbing its higher 20% uranium enrichment activities until the third step, after the lifting of US and European sanctions, might be viewed as a disheartening sign that Iran may still not be prepared to seriously negotiate. At the same time, it could be read as an Iranian effort not to appear over-eager for a deal, ahead of anticipated negotiations Tehran does hope will lead to sanctions relief.

“Iran is still in the opening salvo stages of negotiations, presenting its maximalist demands,” Fitzpatrick, a nuclear expert with the International Institute for Strategic Studies (IISS), told the Back Channel Tuesday. “And clearly these so-called reciprocal concessions are not in the ballpark for what the six powers can accept. Because Iran is not really giving up anything other than 20%. No mention of Fordo, of its stockpile [of enriched uranium] and no limits on its 5% production.”

“Considering that [Iranian President Mahmoud] Ahmadinejad repeatedly said Iran could stop 20% in exchange for fuel for [the Tehran Research Reactor] TRR, now Iran is demanding everything for stopping 20%,” Fitzpatrick continued. “That is not a reasonable position for the P5. And they [the Iranians] need to get in the room and talk seriously.”

The publication of Tehran’s proposal comes as western negotiators have been waiting with growing discouragement for Iran to respond to numerous attempts to schedule a new round of talks with six world powers.

“We have spoken to them a number of times since before the new year and have offered dates and venue, but they still don’t come back with a straight answer,” Michael Mann, a spokesperson for European Union foreign policy chief Catherine Ashton, told the Back Channel Monday. END_OF_DOCUMENT_TOKEN_TO_BE_REPLACED

Iran’s hardline nuclear chief vowed Tuesday that Iran would continue to produce 20% enriched uranium as long as it needs, in defiance of a key international demand in negotiations expected to resume in the coming weeks.

“The Islamic Republic of Iran will not suspend 20 percent uranium enrichment because of the demands of others,” Fereydoun Abbasi-Davani, the head of Iran’s Atomic Energy Organisation (AEOI), was cited Tuesday by Iranian news agencies, Reuters reported.

“The Islamic Republic of Iran will produce 20 percent enriched uranium to meet its needs and for however long it is required,” he said.

Iran has said it needs to domestically enrich the 20% fuel to provide isotopes to treat Iranian cancer patients.

Abbasi’s comments came a day after Iran’s foreign minister struck a conciliatory tone, expressing optimism about prospects for progress at upcoming nuclear talks. “Both sides … have concluded that they have to exit the current impasse,” Salehi said Monday (Dec 17). “Iran wants its legitimate and legal right and no more.”

Diplomats are still uncertain when a new round of nuclear negotiations between Iran and the P5+1 will be held, though the working assumption is that it will come together next month. A spokesperson for European Union foreign policy chief Catherine Ashton told Al-Monitor Tuesday they had still not heard back from Iran on dates they had proposed last week.

“We did make an offer with regard to venue and timing for another round, but we have yet to hear from the Iranians on this,” State Department spokeswoman Victoria Nuland told journalists at a press conference Monday. “So really, the ball is in the Iranians’ court.”

Amid the uncertainty on the P5+1 track,  Iran expressed interest in moving forward with talks with the International Atomic Energy Agency (IAEA). A senior IAEA team visited Iran this month, pronouncing it a useful visit, and is due to return January 16th. END_OF_DOCUMENT_TOKEN_TO_BE_REPLACED

On Sunday, Finnish cyber security expert Mikko Hypponen received a series of emails from someone purporting to be a scientist at Iran’s atomic energy organization.

“The scientist reached out to publish information about Iranian nuclear systems getting struck by yet another cyber attack,” Hypponen, wrote on his blog., citing from the scientist’s emails:

I am writing you to inform you that our nuclear program has once again been compromised and attacked by a new worm with exploits which have shut down our automation network at Natanz and another facility Fordo near Qom.

According to the email our cyber experts sent to our teams, they believe a hacker tool Metasploit was used. The hackers had access to our VPN. The automation network and Siemens hardware were attacked and shut down. I only know very little about these cyber issues as I am scientist not a computer expert.

There was also some music playing randomly on several of the workstations during the middle of the night with the volume maxed out. I believe it was playing ‘Thunderstruck’ by AC/DC.

Hypponen, reached by Al Monitor Tuesday, said he has confirmed the emails were coming from Iran’s atomic energy organization, but can’t vouch for the AC/DC breaking out on the work stations., or any of the other details his correspondent provided.

“I only know what the scientist from AEOI told me,” Hypponen told Al Monitor by email Tuesday. “I can’t confirm any of his sayings, but I can confirm the emails were coming from AEOI.”

“He emailed me three times on Sunday,” Hypponen continued, adding that he published the message with his correspondent’s permission. “Since then he hasn’t responded to my emails. He was sending and receiving email at an official aeoi.org.ir address.”

So is the correspondent really who he says? It’s interesting to note that he gave permission for his email to be published. Was he looking for help in halting the alleged malware attack–or publicity? Perhaps a clever information operation meant to stoke more paranoia in the ranks of Iran’s nuclear program.