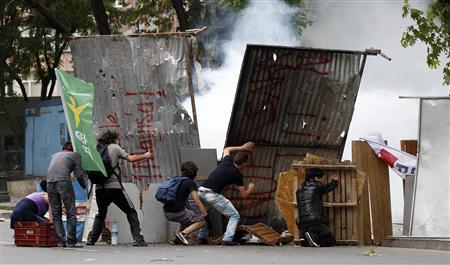 Why really is the AKP in a rush about alcohol bans? Why the hurry? END_OF_DOCUMENT_TOKEN_TO_BE_REPLACED

Israeli Prime Minister Benjamin Netanyahu on Friday apologized to Turkey for a 2010 raid on a Gaza-bound flotilla that killed 10 Turks, in what US officials hailed as “a first step” toward reconciliation between the former allies.

The apology was made in a thirty minute, three-way call between President Obama, Netanyahu and Turkish Prime Minister Recep Tayyip Erdogan, conducted from a trailer on the airport tarmac in the last hour of Obama’s historic visit to Israel, the US officials said.

“Netanyahu apologized for the Mavi Mara flotilla incident and acknowledged ‘operational mistakes,'” said one senior US official, according to the White House pool report.

“Prime Minister Erdogan accepted the apology on behalf of Turkey,” the US official added.

Netanyahu also agreed in the call to set up a humanitarian fund to pay compensation to the families of those killed in the raid, making way for the restoration of full diplomatic ties between the two countries, which are both important US allies.

Erdogan, in the call, spoke “of the importance he attaches to the shared history and centuries old ties of strong friendship and cooperation between the Jewish and Turkish peoples,” a statement from the Turkish prime minister’s office said.

The U.S. nudge towards restoration of Turkish-Israeli diplomatic ties marks a significant “get” in Obama’s visit to Israel that has been otherwise short of concrete deliverables, while long on warm words and upbeat reassurances on the strength of the US-Israeli alliance and security ties.

Nine Turks and one Turkish-American citizen were killed in the May 2010 Israeli assault on the Mavi Marmara flotilla, which had sought to break Israel’s blockade to deliver humanitarian supplies to the Hamas-controlled Gaza strip. Turkey downgraded diplomatic ties with Israel following the incident, and said it would not restore them until Israel formally apologized and paid compensation.

A past US effort to broker a resolution reportedly fell apart at the last minute after Netanyahu, under pressure from his then foreign minister Avigdor Lieberman, decided not to issue the agreed-upon apology language. Temporarily out of the new Israeli government while awaiting trial on alleged corruption charges, Lieberman on Friday railed against the Israeli apology, saying it endangered Israeli troops and counterterrorism operations.

Once close Israeli-Turkish ties have grown increasingly strained since Israel’s 2008 Cast Lead operation against Hamas, and more broadly as Erdogan’s ruling Islamist Justice and Peace (AKP) party has moved to bolster ties with Arab countries and peoples in the region, while also moving to subvert the country’s once dominant secular military command.

Military ties formed the backbone of the Turkish-Israeli strategic alliance at its height, said Dan Arbell, Israel’s recent Deputy Chief of Mission in Washington, who is studying the relationship as a guest scholar at the Brookings Institution Saban Center. Even the restoration of formal diplomatic ties now–as well as brisk economic trade–is not likely to return Israel and Turkey to the level of rapport they enjoyed in the past, given the reduced role the Turkish military plays under Erdogan and the AKP, he said.

“This begins a process of normalization, but I do not see it bringing the countries back to the level of relations they had between them in the 1990s,” Arbell told Al-Monitor in an interview Friday. However, an opening for rapprochement has arisen amid a growing “convergence of interests” between Ankara and Jerusalem in the region, he said, including shared concerns about spillover from the Syria conflict, and Ankara’s deepening rift with Iran.

Though Turkish-Israeli reconciliation was expected to be an agenda item during Obama’s conversations in Israel this week, Arbell said he was pleasantly surprised at the speed of the diplomatic breakthrough.

“The pace of this was surprising,” he said, adding that the parties would not have been able to overcome the diplomatic impasse wihout Washington’s mediation.

Following the call Friday, Obama traveled to Amman, Jordan for the final leg of his Middle East trip. In Jordan, he will meet with King Abdullah and then travel to the ancient city of Petra.