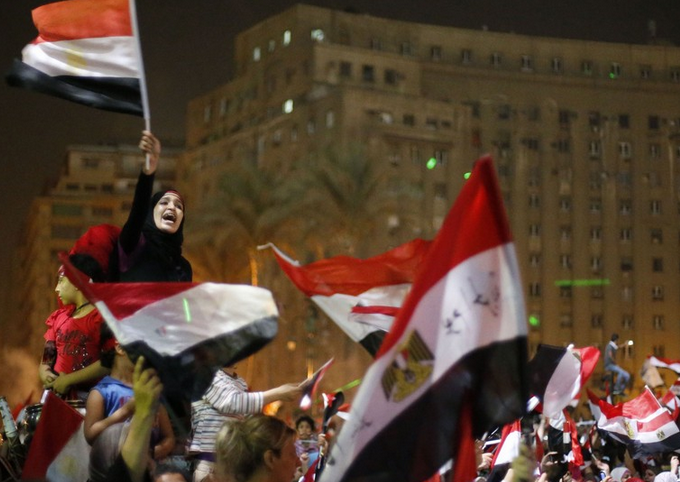 Egypt's military chief announced Wednesday that it was stepping in to transfer power from Egypt's Islamist President Mohammad Morsi to a technocratic government ahead of early parliamentary and presidential polls.

“President Mohammad Morsi has failed to meet the demands of the Egyptian people,” Egyptian army chief Abdel Fattah al-Sissi said in a televised address to the nation Wednesday, al-Arabiya reported.

Flanked by Muslim and Christian clerics and opposition leader Mohammed ElBaradei, al-Sissi vowed “not to exclude anyone or any movement” from Egypt's political process.

He said Egypt's military did not plan to become involved in politics, but was responding to the demands of the people, as witnessed in some of the largest protests ever seen. But shortly after he spoke, to fireworks and ecstatic cheers of anti-Morsi protesters in Cairo's Tahrir Sqaure, the Muslim Brotherhood's television station “went blank,” the Associated Press reported.

Morsi was reported to have been taken to an undisclosed location. A statement on his Facebook page said “that the measures announced by the Armed Forces' General Command, are considered a 'military coup,' …and this is rejected,” Al-Arabiya reported.

“What we are seeing now is a major change in the dynamics in the region,” an Egyptian official, speaking not for attribution, told Al-Monitor Wednesday. “The idea that you need a secular dictator to protect you from religious autocracy is falling apart.”

The “lively forces of the population are the ones who will oust the dictatorship–secular or religious,” the Egyptian official continued.

Egyptians did not accept that they have to choose between an autocratic Muslim Brotherhood government or military rule, he said. If they didn't like the next government, he said, Egyptians would take to the streets again and bring it down, too.

Morsi's ouster came as the United States had steadily distanced itself from him over the past 48 hours, while insisting that it wasn't taking sides.

President Morsi, in a speech Tuesday, “had an opportunity to lay out some specific steps” to show responsiveness to the demands of the protesters, “and he did not take the opportunity to do that,” State Department spokesperson Jen Psaki told journalists at a press conference Wednesday. Meantime, the State Department on Wednesday also ordered non-emergency U.S. personnel and diplomats' family members to leave Egypt, and urged American citizens to defer travel to Egypt due to the unrest.

Earlier Wednesday, Essam al-Haddad, a top foreign policy advisor to Morsi, warned in a statement posted to his Facebook page that what is happening in Egypt is a military coup:

As I write these lines I am fully aware that these may be the last lines I get to post on this page.

For the sake of Egypt and for historical accuracy, let’s call what is happening by its real name: Military coup. […]

You have heard much during the past 30 months about ikhwan excluding all others. I will not try to convince you otherwise today. Perhaps there will come a day when honest academics have the courage to examine the record. ….

The State Department said Wednesday that it was not taking sides, but it was disappointed that Morsi, in his speech Tuesday, did not offer more steps responding to protesters' demands.

“There are broad immediate steps that could be taken, [including] to call for an end to the violence, specifically violence against women; and… take steps to engage  with [all parties, including] the opposition and the military,” State Department spokesperson Jen Psaki said Wednesday. END_OF_DOCUMENT_TOKEN_TO_BE_REPLACED