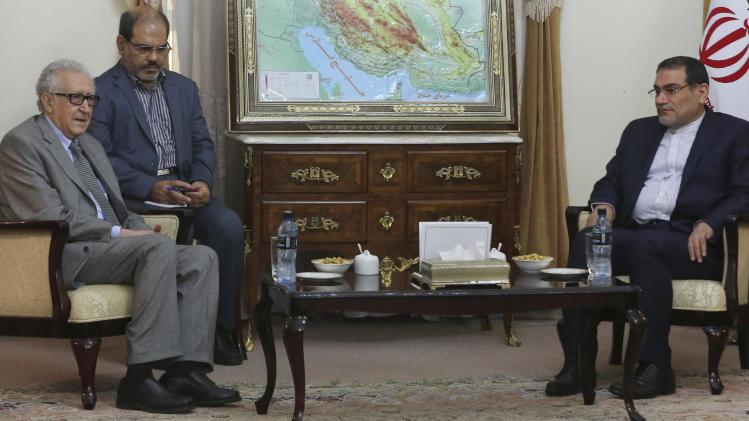 Ali Shamkhani, in a two-hour meeting with Brahimi in Tehran Sunday, “expressed strong worry” that the UN was being influenced by the “will of certain countries that are opposed to the restoration of stability in Syria,” the Islamic Republic News Agency reported. “The SNSC secretary said he was surprised that some countries are worried lest democracy would prevail and the peopleˈs choice would be respected in Syria.”

Brahimi, speaking to reporters at the UN last week, warned if Assad ran in new elections, the Syrian opposition would likely refuse to return to reconciliation talks.

But Syria–and its Iranian patron–seen intent on pressing ahead. “Syria plans to hold presidential elections this summer in all areas under government control and President Bashar al-Assad will likely be one of several candidates to run,” the Wall Street Journal reported Tuesday, citing Syria’s minister of information.

Shamkhani, an ethnic Arab who served as Minister of Defense in the Khatami administration, was expected to play a key role in Iran’s handling of the Syria crisis, Ali Hashem reported at Al-Monitor in September.

“Illusions have cost 150k lives in Syria,” Zarif wrote on Twitter Monday after meeting Brahimi, before he traveled to Vienna for talks with the P5+1. “Reality check=progress.”

Amir-Abdollahian, according to IRNA, said that Iran has proposed a four-point plan for resolving the Syrian crisis. “The details of the plan have not been publicly announced but we are following up on it through negotiations and diplomatic consultations,” IRNA cited Amir-Abdollahian, who published an article on the plan at Al-Monitor (March 5).

Separately, the State Department on Monday announced that Daniel Rubenstein will succeed Robert Ford as the US Special Envoy for Syria, as Al-Monitor previously reported.