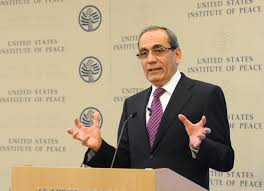 Egypt and the United States are reviewing their relations, but both countries benefit from their strategic partnership, Egypt’s envoy to Washington said Monday.

“No doubt we are in a state in which both sides are revising their concepts about the relationship,” Egypt’s Ambassador to the United States Mohamed Tawfik told Al-Monitor in an interview Monday. “We are reviewing it in more ways than one. The objective of this review is not to downgrade relations, but rather to make sure to continue to build relations, but on sounder and stronger foundations.”

“Sometimes you may take things for granted,” the Egyptian envoy said. “It is important to understand in what ways both benefit from it.”

Tawfik spoke from Cairo’s embassy two days after Egypt’s interim government announced that Egypt would hold a referendum next month (January 14-15th) on a new draft constitution—a step the envoy said would help Egypt advance the democratic process and let Egyptians move forward in the wake of the July 3 ouster of President Mohamed Morsi. It also came as the Senate Foreign Relations Committee was expected on Wednesday to introduce legislation that could ease US assistance to Egypt and give the administration more leeway to waive current restrictions on aid after a military coup.

“We are continuing to work with the Congress to ensure we obtain the funding and authorities necessary to provide assistance for Egypt, consistent with the approach we outlined earlier this year,” Bernadette Meehan, spokesperson for the National Security Council, told Al-Monitor Wednesday of the Egypt aid bill.

“The idea is to put in place democratic institutions and a democratic process and leave the door open for everyone to participate,” Tawfik said of the upcoming referendum on the draft constitution. “We are on track in the road map.”

But US-Egyptian ties may take longer to adjust. The envoy declined to comment on a New York Times report  from October citing National Security Council officials suggesting that Egypt would be less of a priority for the White House in Obama’’s second term. But he said Washington should not take Egypt for granted.

“Egypt has been and will remain a central player in the Middle East,” Tawfik said. “Its role is indispensable… The United States needs and will  continue to need regional partners who are dependable and at the same time have the acceptance of different parties in the region. Egypt is that first and foremost.”

Egypt’s interim rulers have in recent months been intensifying efforts to fight jihadi extremists in Sinai and have struck tunnels into Gaza, a priority for Egypt as well as Israel. and the United States “One of the areas that we have been very active in in the past few months has been to try and deal with the extremists in the Sinai,” Tawfik said. “And to destroy some of the tunnels into Gaza. This has been so far a successful operation. This certainly has served Egypt’s national interests, and been very useful for the US as well.”

Asked about violence in the Sinai, Tawfik said the area had become more fertile ground for extremists during Morsi’s one year rule.  “No doubt that the number of extremist elements in Sinai increased dramatically during the one year in which the Muslim Brotherhood ruled Egypt,” Tawfik said. “Now it is up to us to deal with that issue. So [the extremists] are not able to harm Egyptians. These are very dangerous elements.” END_OF_DOCUMENT_TOKEN_TO_BE_REPLACED