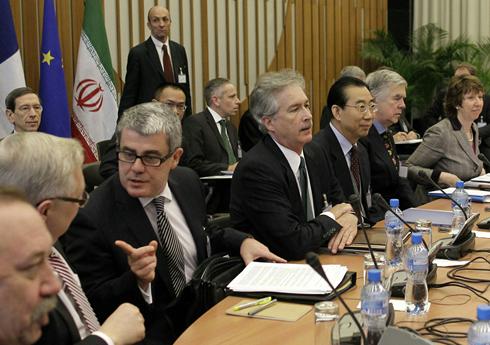 When six world powers and Iran next hold nuclear talks in Vienna June 16th, France will have a new top negotiator.

France’s new political director and top negotiator at the P5+1 talks with Iran will be Nicolas de Rivière, who most recently served as France’s assistant secretary of UN affairs. De Riviere previously served as France’s deputy permanent representative at the UN in NY, among other diplomatic assignments.

The switch in France’s Iran team is not the only personnel change on the horizon, as negotiators seek to reach a final Iran nuclear accord by July 20, when a six month interim deal expires. European Union foreign policy chief Catherine Ashton is due to step down in October. US Deputy Secretary of State Bill Burns, who led a US diplomatic “back channel” to Iran last year, has also announced he will retire in October.

Technical experts from the P5+1 and Iran began meeting in Vienna Wednesday for two days of expert level talks (June 5-6).

Meantime, lead US Iran nuclear negotiator, Under Secretary of State Wendy Sherman, is in Brussels Wednesday as part of President Obama’s delegation to the G-7 Leaders’ Summit, the State Department said.

US officials say they are working to try to reach a final deal by July 20th. “We are working towards the July 20th date, and we believe we can meet that date,” State Department deputy spokeswoman Marie Harf told Al-Monitor Monday.

But one western diplomat from a member of the six negotiating powers told Al-Monitor Wednesday that he thinks an extension is probably likely to be needed.

“The end of July comes very, very soon,” the western diplomat, speaking not for attribution, told Al-Monitor Wednesday. “We definitely prefer to have a strong, clear, sustainable long-term agreement, even if we need a few months more, than what would be considered as an insufficiently good…agreement in the next six weeks.”

The western diplomat described the final deal talks to date as “serious” and delving deeply into the details. But the last round of talks in Vienna in May, while “serious,” were “also difficult,” he said. “We still have wide differences on some of the fundamentals of the talks, including mainly Arak and uranium enrichment capacity.”

The Iranians “have to make a clear political choice, which is really a kind of prerequisite for a long-term and sustainable agreement,” the diplomat said.

Western diplomats expressed confidence about Iran sticking to the terms of an interim nuclear accord signed in Geneva last month as they met to discuss implementing the agreement and the process going forward for negotiating an end state deal.

The diplomatic consultations come ahead of a technical meeting between diplomats from Iran and six world powers in Vienna next week that will focus on implementing the November 24th accord.

“I think it will hold, because it’s in Iran’s interest for it to hold,” Under Secretary of State Wendy Sherman told the PBS News Hour Wednesday (Dec. 4). “Iran is looking for some economic relief. There’s very little in this agreement, but it is the first step to a comprehensive agreement which will give them the economic relief they are looking for.”

“We are discussing 6 or 7 parameters that have to be crystallized into the common position of the P5+1,” a senior western official, speaking not for attribution, said Thursday, of the diplomatic consultations among the six world powers. The current priority is “implementation of the Nov. 24 agreement and deciding on a process.”

In terms of implementing the Phase 1 deal, “there are obvious facts to be confirmed by the [International Atomic Energy Agency] IAEA – stopping 20 percent, converting half the stockpile… enhanced monitoring,” the senior western official said.

Secretary of State John Kerry and European Union foreign policy chief Catherine Ashton discussed that process for implementing the Iran deal when they met in Brussels earlier this week. Deputy Secretary of State William Burns and Under Secretary Sherman were scheduled to meet with French political director Jacques Audibert  on Thursday, the State Department schedule indicated. The British non-resident charge to Iran Ajay Sharma, until recently the UK’s deputy political director, was also in Washington for consultations Thursday, after traveling to Iran earlier this week, diplomatic sources said.

Burns has been leading a bilateral channel with Iran that gained momentum after the August inauguration of Iranian President Hassan Rouhani,  Al-Monitor first reported last month (November 24). Sherman leads the US negotiations between the P5+1 and  Iran. The bilateral discussions between Iran and the United States have focused almost exclusively on the nuclear issue and fed back into the P5+1 negotiations with Iran, US officials stressed, though the issue of Americans held in Iran has also been raised.

“All of the issues that arose in that private bilateral conversation also arose in the P5+1,” Sherman told PBS. “And I think very effectively the P5+1 used our bilateral channel and other bilateral discussions that were going on with other partners to get to this agreement.”

European Union foreign ministers are scheduled to meet on December 16 to discuss possibly suspending some EU sanctions against Iran for a period of six months as part of the first phase agreement reached in Geneva on November 24th.

The US administration has urged Congress to hold off on passing new sanctions on Iran–even if the sanctions would not come into effect until after six months if an end state deal is not reached. END_OF_DOCUMENT_TOKEN_TO_BE_REPLACED