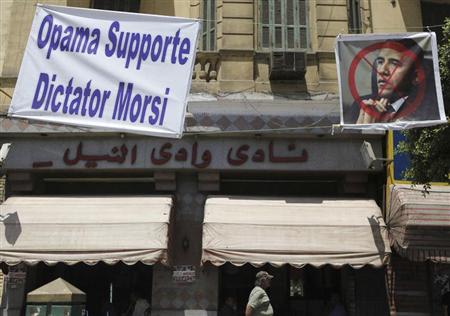 Two former U.S. envoys to Egypt advise that given the uncertain and violent turn of events, Washington should avoid public statements for now.

Washington was perhaps slow to recognize and try to correct the widespread perception in Egypt that the U.S. government was supporting Mohamed Morsi’s Muslim Brotherhood government–as opposed to the elected government of Egypt.

“The United States has been behind the curve for a long time in this revolution, and I think it’s a little behind the curve this past week as well,” former US Ambassador to Egypt Daniel Kurtzer told Al Monitor in an interview Sunday.

“We gave the Muslim Brotherhood and Morsi in particular a very long time to prove his capabilities and his understanding of democracy and he failed on both counts,” Kurtzer, now at Princeton University, said. “He was a totally inept president–which is not necessarily a reason to be thrown out of office. He was also a president who didn’t understand what [democracy] means in terms of inclusiveness and respect for institutions.”

Kurtzer was a junior diplomat in Cairo in 1981 when Anwar Sadat was assassinated. He rose through the Foreign Service ranks to serve as Bill Clinton’s envoy to Egypt and the Bush administration’s ambassador to Israel.

“I think the best thing to do is to avoid public statements,” Kurtzer said. Given the fast-moving situation and current atmosphere of heightened tensions, “at this point, all public statements are being misunderstood.”

“If you know and respect you’re in a hole, don’t take out a shovel and dig any deeper,” Wisner, a former US Ambassador to Zambia, India, the Philippines and Egypt, told Al-Monitor in an interview Sunday. “The less we say, the better.”

The son of a legendary CIA officer, Wisner joined the Foreign Service in 1961, and served for over four decades in the Middle East, Africa, and Asia. During the anti-Mubarak protests in 2011, he served as a special advisor on Egypt for the Obama administration and then Secretary of State Hillary Clinton. He is now a foreign policy advisor at Patton Boggs.

“We got ourselves painted into a corner,” Wisner said. “And now we’re in the awkward position of un-painting ourselves. And it’s not very graceful.”

How did we get here?

“My own personal view is that, in an attempt to do something that I think made sense – which was to try…to get the Muslim Brotherhood government to open its doors, and create national consensus and stability and a chance to unveil some policies that might work–we allowed ourselves to get painted in the corner as supporting the Muslim Brothers, without making clear what we were trying to accomplish,” Wisner said.

“I am also frank enough to recognize there are moments when our approach to things and the mood swing, and we find ourselves out of step,” Wisner said.

President Obama “had exactly the right line. If we had only just stuck to it,” Wisner said, paraphrasing the president’s statement on Egypt last week, ‘We don’t pick governments in Egypt.’

“Say that and be done with it,” he advised. “And stop babbling and leaping to get on the right side of every fence. Unfortunately in Egypt of the last couple of years, the fence line has moved.”

The current effort by a motley coalition of Egyptian political parties–“the Tamarod gang and the (Salafi) Nour party”–and the military to come to consensus on interim leaders and a transition plan for new elections and a constitution is likely to be bumpy, Wisner said. But “to build a consensus–a workable, grubby, nasty, deal-making consensus–Egyptians are quite good at that,” Wisner said. “They are consensus people. “

The new transition government should then move to tackle two urgent priorities—restoring law and order, and stabilizing the economy, he advised.