Late last February, after six world powers and Iran wrapped up nuclear talks in Almaty, Kazakhstan (Feb.26-27), two members of the U.S. nuclear negotiating team secretly flew to Oman where they rendezvoused at a beach-front villa with two American officials who had arrived from Washington.

For the first days of March, the American officials, accompanied by some administrative and logistical support staff, stayed at a beach-side villa owned by Oman’s Sultan Qaboos bin Said, whose government had regularly offered to discreetly host US-Iran talks safely away from the media spotlight.

In Oman, the US officials met with an Iranian delegation led by Iranian Deputy Foreign Minister Ali Asghar Khaji, Al-Monitor has learned.

Khaji, then Iran’s Deputy Foreign Minister for European and American affairs, had previously served as Iran’s envoy to the European Union in Brussels from 2008 to 2012. In Brussels, in January 2008, Khaji accompanied Iran’s new nuclear negotiator Saeed Jalili to a dinner hosted by then EU High Rep and chief  nuclear negotiator Javier Solana, a US cable published by Wikileaks notes. In March 2009, Khaji became the first Iranian official to meet with NATO  in almost three decades, to discuss Afghanistan, NATO officials said.

After he became Deputy Foreign Minister in 2012, in his capacity as the Iranian diplomat who oversaw Europe and American issues, Khaji regularly liaised with Swiss officials who serve–in the absence of official US-Iran relations–as the U.S. protecting power in Iran. But Khaji wasn’t a figure particularly well known to western Iran watchers.

In Oman in March, both Khaji’s and Burns’ teams, as well as their Omani hosts, went to some lengths to keep the unusual meeting off the radar. Burns, the second highest diplomat in the United States, did not appear on the State Department public schedules at all the first four days in March, without explanation. Similarly, Iran’s Foreign Ministry and media published nothing about Khaji’s trip to Muscat, although his March 7 trip to Switzerland, a few days after the secret talks with the Americans, was announced by his Swiss Foreign Ministry hosts and received press coverage. The next week in March, Omani media also extensively covered the visit of Iran’s Foreign Ministry spokesman Ramin Mehmanparast to Oman, including his visit to the Omani New Agency and with Oman’s Information minister, complete with photos, almost as if it were a decoy mission to draw attention away from the earlier one.

“On every visit to Oman, the U.S. delegation stayed in a beach-side villa controlled by the Omani government,” a source familiar with the meetings told Al-Monitor. “All of the meetings with Iran occurred at this site, so as to ensure U.S. officials would never have to leave the villa and risk detection by journalists or others.”

Both US and Iranian sources briefed on the US-Iran March meeting in Oman say that while it allowed for more candid, direct exchanges than at the seven nation P5+1/Iran talks, that it did not show an opening for real movement in positions on either side before the Iran presidential elections in June.

“It was a useful engagement, but not much progress was made, because the Iran leadership was not really interested,” a former US official, speaking not for attribution, said. “It helped provide some basis [for understanding]… It was clear that while there could be more intensive and candid discussions bilaterally, the real progress wasn’t going to be possible” before the Iranian elections.

Another meeting was tentatively planned to be held in May, another former official told Al-Monitor, but the Iranians apparently backed out.

Oman to US: Iran is ready to begin a quiet dialogue

The Omanis had encouraged the U.S., from before President Barack Obama came into office, to pursue prospects for direct dialogue with Iran, and regularly offered US envoys updates on the current mood in Iran officialdom on the matter.

Oman’s Foreign Minister Yusuf bin Alawi “offered Oman as both an organizer and a venue for any meeting the U.S. would want with Iran – if kept quiet,” US Ambassador to Oman Richard Schmierer wrote in a December 7, 2009 US cable to Washington, released by Wikileaks.

Iran “is ready to begin a quiet dialogue ‘at a lower level’ with the U.S.,” Sultan Qaboos’ long-time special Iran envoy and Culture Minister Abdul `Aziz al-Rowas told the previous US ambassador Gary Grappo, according to an April 2009 cable he wrote to Washington.

“They are ready and want to start, and you should not wait,” al-Rowas told the US envoy. “You have many more bargaining tools with them than they have against you; use all of them,” he advised, adding that the US and Iran also share interests, too, including in fighting the Taliban in Afghanistan and countering narcotics in Central Asia. “They don’t like to admit these things, but they need you in the region.” 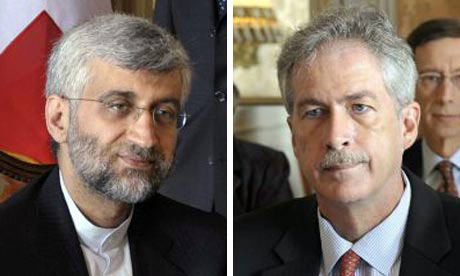 But efforts by the Obama administration to get direct talks going with Iran were frustrated by domestic turmoil in the wake of Iran’s disputed June 2009 presidential polls. In October 2009, Burns and Iran’s Jallili met one-on-one, on the sidelines of P5+1 Iran nuclear talks in Geneva, at which a nuclear fuel swap deal was announced. But Iran later backed away from the agreement, after it came under domestic criticism.

Increasingly convinced that Iran was paralyzed by domestic political infighting from moving forward on a nuclear compromise, the U.S. and Europeans moved in late 2009 and 2010 to persuade international partners that it was time to increase economic pressure on Iran to try to bring it to seriously negotiate.

“No U.S. president in the last 30 years had gone to as much effort as President Obama to engage Iran,” Burns told China’s Foreign Minister Yang Jiechi at a December 2009 meeting, according to a US cable summarizing the meeting. The United States was “frustrated,” Burns explained, that the Iranians had “walked back” from the fuel swap agreement reached in Geneva. Washington “had sought creative solutions to build confidence with Iran…[but] Iran’s failure to follow through…had been disappointing.”

P5+1 talks with Iran ground to a halt at a gloomy January 2011 meeting in Istanbul attended by a grim-faced Burns. Iran’s Jalili, complaining of a headache, had avoided attending most of the meeting, and had refused to meet with Burns. Nuclear talks between the six world powers and Iran would not resume for over a year, until April 2012.

But the Omanis persisted, throughout the diplomatic stalemate, with their quiet efforts to forge US-Iran dialogue, and their patience eventually paid off.

In 2011 and 2012, Talwar and Sullivan–then serving as deputy chief of staff  and policy planning chief to Secretary of State Hillary Clinton–participated in at least two lower-level, “preparatory” meetings with the Iranians, facilitated by the Omanis, to see about the prospect of a bilateral channel to be led on the US side by Burns, a former US official, speaking not for attribution, told Al-Monitor. Those preparatory talks included a July 7, 2012 meeting in Oman attended by Sullivan and Talwar, but not Burns, the AP reported.

“I was a member of a preparatory exploratory team that met with the Iranians on a couple of occasions to see if we could get talks going on the nuclear program,” Talwar told the Senate Foreign Relations Committee at his confirmation hearing to become Assistant Secretary of State for Political-Military affairs last month. “We met with the Iranians in Oman last summer. We had another meeting in March of this year.”

“It turned out the Iranians could not move forward with the talks at that point,” Talwar said, referring to the March 2013 meeting in Oman led by Burns and Khaji.

But the US-Iran back channel got traction after the election of Hassan Rouhani, and gained rapid pace after an exchange of letters in August between Presidents Obama and Rouhani. “President Rouhani and the Iranians agreed to move forward with the talks at that time,” Talwar said.

“We then had an accelerating pace of discussions bilaterally with the Iranians,” Talwar said, stressing that the one-on-one talks with the Iranians were “tied from the get-go to the P5+1 process [and] . . . focused exclusively on the nuclear issue.”

Since Rouhani’s inauguration in August, there have been at least five rounds of bilateral talks between the U.S. and Iran, in Oman, New York and Geneva. On the U.S. side, they’ve been led by Burns, and on the Iran side, by Khajji’s successor, Iranian Deputy Foreign Minister for European and American affairs Majid Ravanchi, sometimes joined by his colleague, Iranian Deputy Foreign Minister for Legal and International Affairs Abbas Araghchi. Both Araghchi and Ravanchi are members of Iran’s nuclear negotiating team, led by Iranian Foreign Minister Mohammad Javad Zarif.

END_OF_DOCUMENT_TOKEN_TO_BE_REPLACED

Western officials hope the two lead negotiators will be able to agree at the meeting on a new date and venue for resumed P5+1 talks on Iran's nuclear program.

Meantime, the foreign ministers from the P5+1—the United States, United Kingdom, France, Germany, China and Russia—are due to meet on Iran in New York, possibly on September 26th, a western official, speaking not attribution, said Thursday. (The State Department said it did not yet have a confirmed date for that meeting.) Iran is not currently expected to attend the meeting, but one source left open the possibility that could potentially change, depending on what Zarif and Ashton decide.

While Zarif is also expected to separately meet with British Foreign Secretary William Hague and with Russia’s Sergei Lavrov, no meeting with the U.S. has been planned, he told Iran’s Press TV in an interview Wednesday.

It’s possible that an impromptu “hallway” meeting could occur between US Secretary of State John Kerry and Zarif, but one is not planned, a western source suggested.

The White House has not confirmed but neither denied numerous Iranian reports that President Obama sent new Iranian President Hassan Rouhani a letter last month following his inauguration. A spokesperson for the U.S. National Security Council told the Back Channel that they don’t discuss private correspondence. But current and former US officials indicated to the Back Channel they believe such a letter was sent, via Oman’s Sultan Qaboos, who traveled to Iran late last month. Obama is reported to have sent two earlier letters to Iran's Supreme Leader Ayatollah Khamenei, in 2009 and earlier this year.