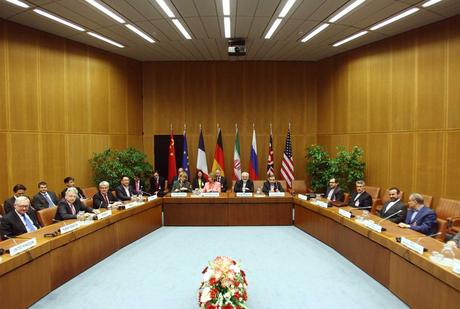 Vienna__ A senior U.S. official took a tougher line on prospects for reaching a final deal as negotiators from Iran and six world powers arrived here to begin the first drafting round towards a comprehensive Iran nuclear accord.

“Everyone comes to the table wanting a diplomatic solution,” the senior U.S. administration official, speaking not for attribution, told journalists in Vienna Tuesday. “But having the intention does not mean it will happen.”

“Frankly, this is very, very difficult. Though we are drafting… it does not mean agreement is imminent,” the U.S. official cautioned. “There are a range of complicated issues to address. We do not know if Iran will accept” taking the steps necessary.

I am not optimistic or pessimistic, but realistic, the US official said, in answer to a question about what seemed a notably less upbeat forecast about prospects for reaching a compromise than in recent earlier rounds focused more on agenda-setting. She was also reacting to what she said was speculation in the media about provisional agreement reached on aspects of a final deal, such as a solution to the Arak reactor, and a growing sense of optimism in media reports that a deal would be reached.

“What we are working on is a package,” the US official stressed, calling the prospective final deal document the Comprehensive Plan of Action. “Not a checklist. Each individual piece affects the overall outcome. …The only percentage that matters is 100%.”

“One can see how one can get to an agreement by July 20,” but whether we can “get to it is another matter,” the US official said. “This is very tough…. There are points of agreement, there are significant gaps. It is not that there is no solution. There are. Getting to them is another matter.”

The US official’s less upbeat tone on prospects for reaching a final nuclear deal is both meant to manage expectations as the hard bargaining really begins, and because serious differences remain in the two sides’ positions, said Ali Vaez, senior Iran researcher at the International Crisis Group, and lead author of a major new report on solving the Iran nuclear issue, released last week.

Likening the closing weeks of the negotiations to a poker game, Vaez suggested that the negotiating atmosphere is likely “to get worse before it gets better.” It could “get to the point of almost breakdown before both sides reveal their real bottom line.”

This, the fourth round of final deal talks, kicked off Tuesday night with a dinner between Iran Foreign Minister Mohammad Javad Zarif and European Union foreign policy chief Catherine Ashton and their top aides at the office of the Iran mission to the UN in Vienna. The full meeting begins Wednesday with a plenary meeting involving political directors from the P5+1 and Iran, chaired by Ashton and Zarif at the UN. It’s expected to continue at least through Friday.

Zarif, arriving in Vienna Tuesday, told Iranian media he expected at least three more rounds of political director talks before July 20, but those dates have not yet been announced.

The parties are “quite focused on the July 20 date” when the six month interim deal, known as the Joint Plan of Action (JPOA), expires, the US diplomat said. “We expect to negotiate every moment ’til then.”

Six world powers and Iran are on pace to start drafting the text of a comprehensive Iran nuclear accord in May, with the aim of reaching a final agreement by the July 20th expiration of the six month interim deal, a senior U.S. official said Friday ahead of the third round of final deal talks in Vienna next week.

“We have set out a work plan on how to proceed to get a comprehensive agreement…and we are on pace with that work plan and look to begin drafting in May,” the senior U.S. administration official, speaking not for attribution, told journalists in a conference call briefing Friday.

“All of the parties are committed to finishing within the six-month [duration of the] Joint Plan of Action,” the official said. “I am absolutely convinced that we can.”

“So the real issue is not about whether you can write the words on paper,” the U.S. official said. “It’s about the choices Iran has to make, some very difficult, in order to ensure that Iran cannot obtain a nuclear weapon.”

There have been no additional US-Iran bilateral meetings outside of those that have taken place on the sidelines of the P5+1 Iran meetings in Vienna and been announced, another senior U.S. official told Al-Monitor Friday.

As to whether it is accurate to detect that US officials are expressing more confidence about reaching a final deal, in particular in the six month time frame without needing an extension since comprehensive deal talks got underway, the second U.S. official affirmed that may be the case.

“I think you’re right to say increasing confidence since the talks started – everyone has kept their commitments in implementing the JPOA, we’re having substantive and detailed discussions about the issues that will have to be part of a comprehensive agreement,” the second senior U.S. official said.

But “we are still clear-eyed about how tough this will be,” the second U.S. official added. “The real question is if everyone is willing to make the tough choices this will require.”

The first two rounds of comprehensive deal P5+1/Iran talks to date, supplemented by intensive expert-level talks, have been used to “to go over every single [element of] a future agreement and to make sure we understand each others’ positions on those issues, both at the macro level and the technical level,” the first senior U.S. official said.

Even the early rounds of comprehensive deal talks focused on agenda setting and “laying the table” for drafting the comprehensive accord have been “quite substantive,” the official said.

“When you lay the table, you get down to…serious issues…and in those discussions, one begins to see areas of agreement and areas where [there are] still gaps that have to be overcome,” the official said.

The official spoke in the wake of the release of reports this week by the former top State Department Iran arms control advisor Robert Einhorn, and a Princeton nuclear expert team, that propose ways Iran could keep but modify key facilities in its nuclear program in a final deal, while reducing international proliferation concerns and extending its nuclear breakout time to between six months and a year. Iran has insisted that it be allowed to maintain a domestic enrichment program and that it would not dismantle key facilities, but has expressed willingness to make modifications to the Arak reactor.